skip to main | skip to sidebar

I've moved my blog to Wordpress - you can find it here
Posted by biggabush at 3:11 AM

Posted by biggabush at 1:05 AM

Nice to see some green shoots coming up.

Here are a couple of current faves, some old some new:

Starting with Deerhoof, a band I stumbled across in a conversation a about Chrome Hoof and then fell in love with. Their videos are great too.

This track, "The Perfect Me" is from their 2007 album Friend Opportunity.


This one inspired me to go back to 10cc's Sheet Music, a forgotten classic, check this one from it.

This is an amazing concert, a 60-piece orchestra performing arrangements of Dilla's music. Hook up your hi fi and turn it UP!!
Posted by biggabush at 9:52 AM

BIGGA ON BOOTSY'S FOR THE LOVE SHOW

Posted by biggabush at 6:40 AM

Didn't quite get the chance to do an exclusive mix this month....so here's my spot on the Big Chill Radio from this years' festival:

Look out for a prog/psych special coming in 2011
Posted by biggabush at 5:53 AM

This month's mix for your listening pleasure....

A nice wee slice of latin dub from our man in Colombia.

From the excellent mash-up album with Mos Def's vocals over Scientist and other classic dub backings, produced by Max Tannone - Mos Dub.

05 Jackie McLean & Michael Carvin - De I Comahlee Ah (edit)
Some pretty intense spiritual jazz from the 1975 album Antiquity.
06 Kings Go Forth - Don't Take My Shadow
Kings Go Forth are a current soul band that sound straight out of the 60s, signed to Luaka Bop. They have the only artwork ever done by Mingering Mike for a real (rather than imaginary) album. You'd have to be dead not to be moved by the passion in this performance.
07 Magic Drum Orchestra vs BiggaBush - Afro Drum & Brass
A mash-up of horns and drums from the Lion Head stable.
08 Blast Head - In Water Disco (BiggaBush Version)
A recent production for the excellent Blast Head from Tokyo on their own Free Hand label.
09 Jimi Tenor & Tony Allen - Mama England (edit)
I have mixed feelings about the new collaboration between these two giants of funk and afro...it's fantastic in places, a bit in need of an edit in others. Well worth a listen though.
10 Honor Blackman & Patrick McNee - Kinky Boots
Found this 7" in a carboot sale recently. Watch a fab video for this tune here
11 Whitefield Brothers - Breakin Through
Raw as ever, from their Earthology album.
12 Hypnotic Brass Ensemble - Jupiter
Just saw these at the Larmer Tree Festival and they get better every time. Look out for an amzing new track called "Kryptonite".
13 Excerpt from "Addis to Axum" - mixed by Quantic

This is a really interesting DJ mix of very obscure records dug out by Will Holand on a trip to Ethiopia in 2004, another one to check. And it's a free download.

14 John Keating Incorporated - Never Never Gonna Give You Up 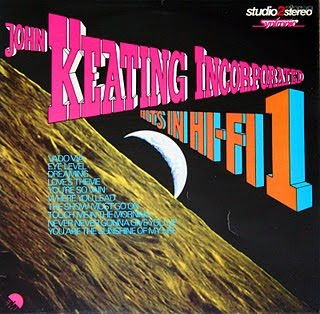 The Walrus of Lurve goes all moogy on us in this 70s take from John Keating Incorporated.
Read about the album Hits In Hi Fi here

Posted by biggabush at 8:06 AM

biggabush
I've been a musician for most of my life, getting into electronic music and sampling when I got together with DJ Dick to form Rockers Hi Fi in 1992. More recently I've combined this with live guitar and recording other instruments, going for an authentic rootsy sound. This has dovetailed nicely with a huge interest in African music, especially funk, highlife and of course afro beat from West Africa in the 1970s. My last album "13 Faces of Lightning Head" was very much in this vein, as well having the usual dub flavours. Right now I'm working on brand new material, with influences ranging from prog rock to hairy funk to orchestral stuff to Bollywood to instrumental hip hop.